Absolute Truth from the Word of God 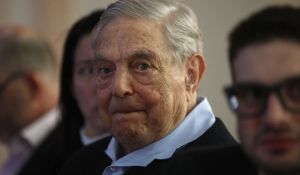 George Soros is the embodiment of evil

Through the years I have written untold number of articles about this man/demon. He sees our globe as his stomping ground; almost like a satanic version of Monopoly.

He is the Globalist of Globalists of all time.  If you want to read other articles about him on my Word Press, just type George Soros.  He started his life as a self- hating Jew (learned this from his father) and helped the Nazis to confiscate all wealth from the Jews in Germany before he ushered them onto the trains which took my people to the DEATH camps.

In the last few years, this madman has infiltrated the Evangelical churches by finding “hirelings” to whom he gave millions of dollars if they would just hop on the false Social Justice gospel band wagon.  And unfortunately, there were plenty of takers including the…