ACCOUNT OF AN EXPEDITION TO THE INTERIOR OF NEW HOLLAND (1837) – Written by multiple parties, with Lady Mary Fox, Richard Whateley and Lord Holland the likeliest authors. «New Holland» was an old name for Australia. In 1860 the novel was reissued under the title preface The Southlanders.

The story centers around an expedition that travels hundreds of miles into the interior of Australia, where the off-course explorers find a fictional chain of lakes and rivers with a Lost Civilization founded by English Dissenters during the Protestant Reformation.

This Lost Civilization is called Southland by its mixed-race inhabitants. The major language is English as it was in the 1500s when Southland was established, so some words and expressions differ from the English spoken by our expedition members. Otherwise, they can communicate with each other just fine. 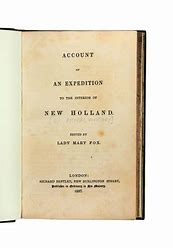